Six recent reports from experts from Arizona State University, Caltech and the University of Chicago Law School have looked into the costs of divestment at universities and the facts are in: Divestment is all cost and no gain.

A new study by Prof. Daniel Fischel of the University of Chicago Law School and co-authors Christopher Fiore and Todd Kendall of economic consulting firm Compass Lexecon finds that both the Colorado Public Employees’ Retirement Association (PERA) and the New York State Common Retirement Fund stand to lose millions every year if they were to fully divest from fossil fuels. In response to increased pressure on Colorado and New York politicians to support divestment, the report—which follows up on their earlier study of pensions in other states—examines the potential impact of a narrow divestment policy that includes oil, natural gas and coal, as well as a broad policy that also includes utility stocks, to determine the financial implications of such an investment strategy.  From the report:

Read more below on the costs Prof. Fischel and his team found for other top U.S. pension funds across the country. 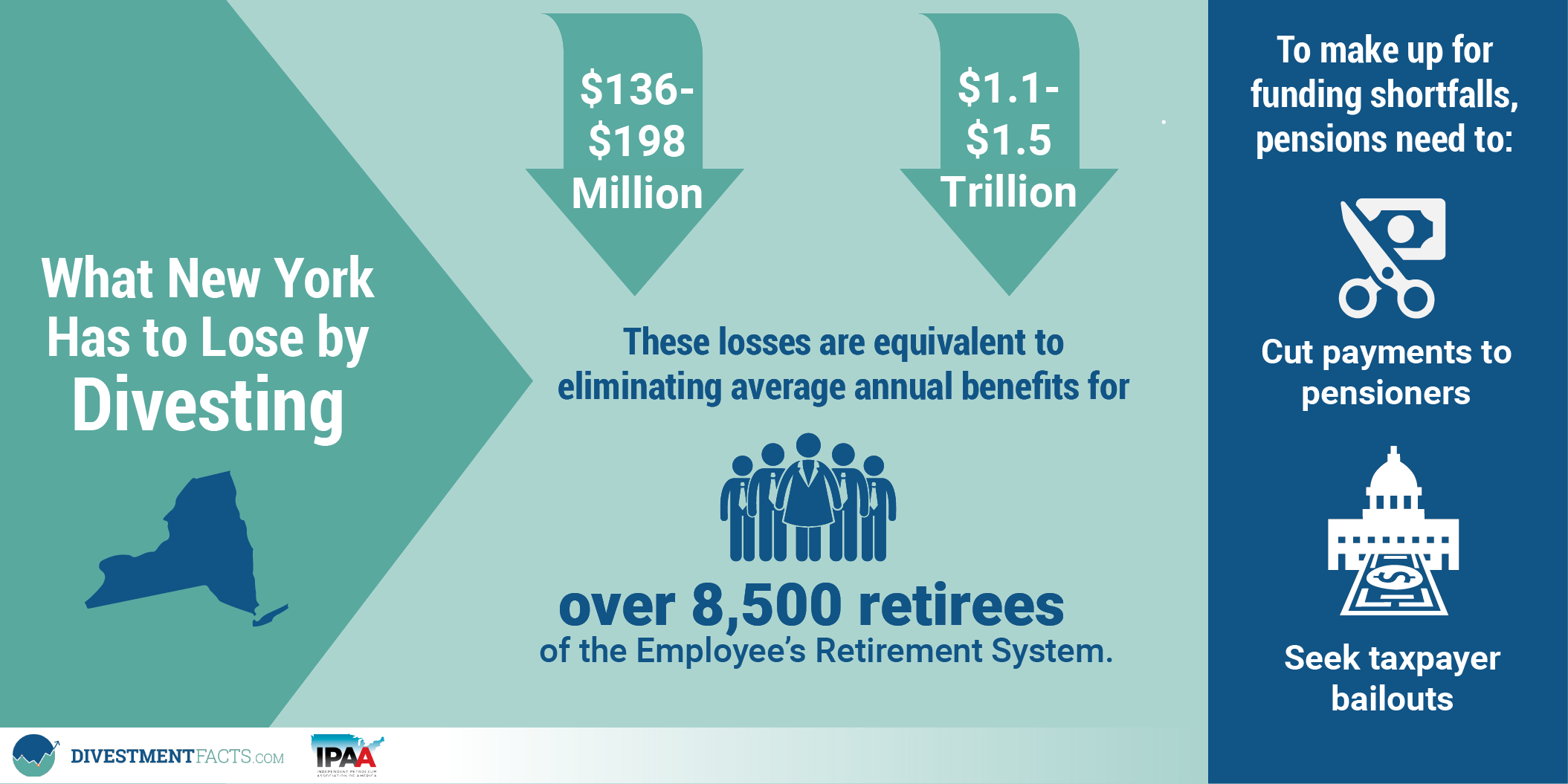 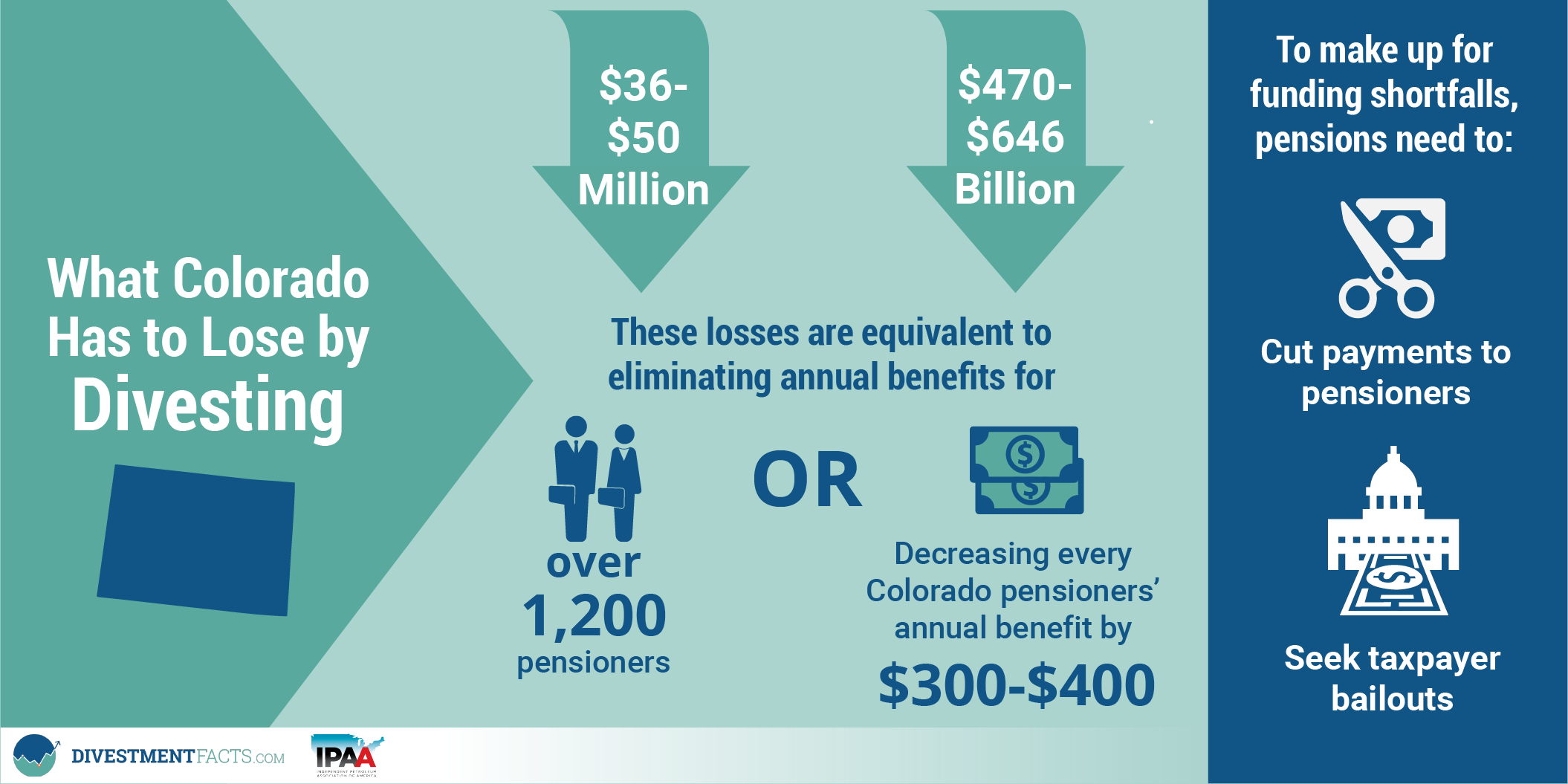 A new report, authored by Prof. Daniel Fischel of the University of Chicago Law School, together with coauthors Christopher Fiore and Todd Kendall of the economic consulting firm Compass Lexecon, now puts a hard number on the real financial impact of divestment at 11 of the nation’s top pension funds, and the costs are staggering. Fischel’s report analyzes 11 of the nation’s top pension funds—including the largest state pension fund, the California Public Employees’ Retirement System (CalPERS) as well as municipal funds in New York City, Chicago and San Francisco to determine the financial impact of divesting. The results indicate that these funds would lose up to a combined $4.9 trillion over 50 years due to reduced portfolio diversification.

Key findings from the report include:

To date, leading pensions from across the nation have said no to divestment activists who continue to push pension funds to divest from fossil fuels despite the impact such a decision may have on the retirees these funds support. This report is just one more piece of evidence why divestment is all cost and no gain for the people who rely on these funds. 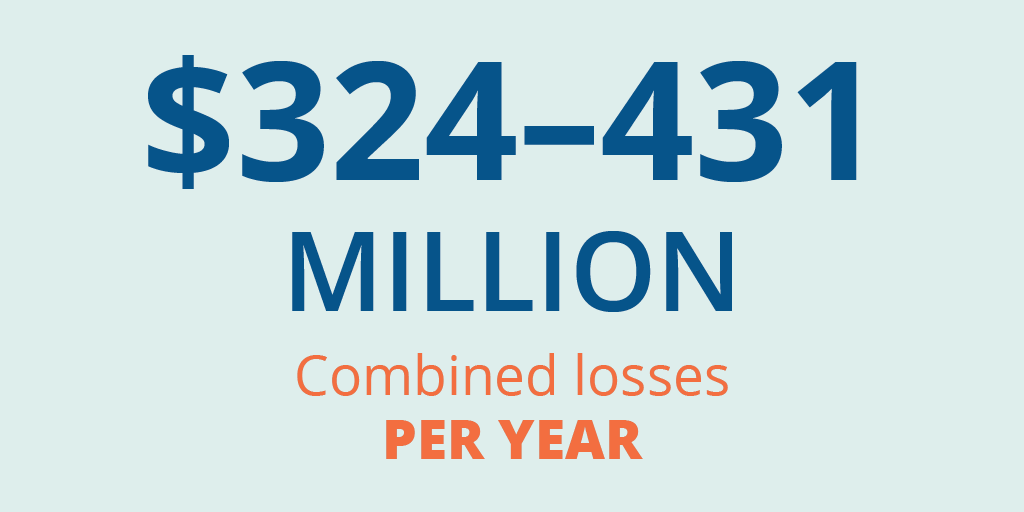 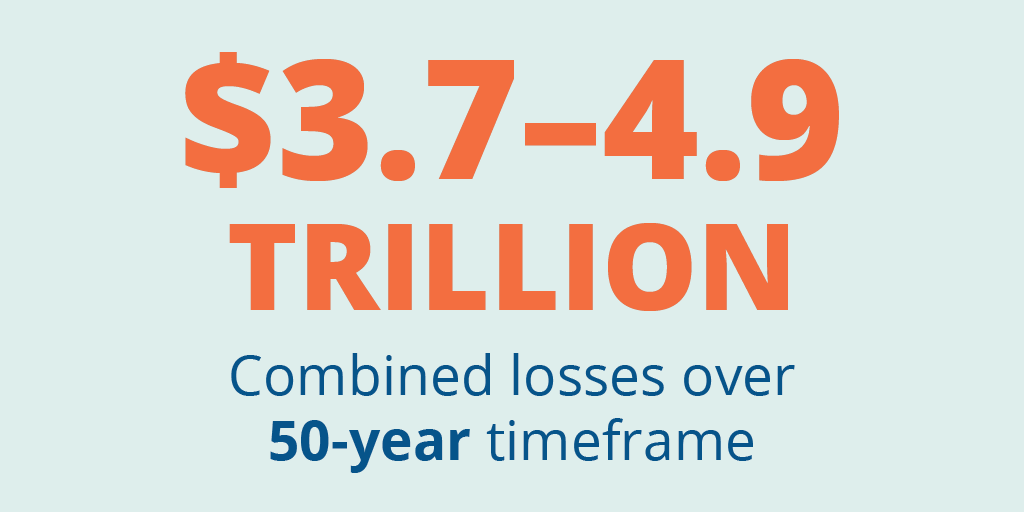 When schools decide to divest, the financial hit their endowments take is both significant and ongoing – having a very real impact on these institutions’ ability to support critical student, faculty and academic programs.

Factor in all the losses incurred thanks to trading costs (1.65 percent), compliance costs (0.56 percent), and diversifications costs (0.23 percent), and the average endowment “hole” created by divestment results in a 15.2 percent drop in transfers from endowment accounts to school programs. That’s according to a new study authored by Prof. Hendrik Bessembinder of Arizona State’s Carey School of Business. What could a 15.2 percent annual reduction in endowment spending mean for the school, its students and its faculty?

As Prof. Bessembinder highlighted on the launch of the report, “Endowments are a vital financial resource for university spending. Due to the significant financial shortfall imposed by divestment, universities who choose such a strategy will have to make serious decisions on how to make up for this loss in funding or lower their endowment spend by increasing tuition, cutting faculty, or reducing on campus services.” 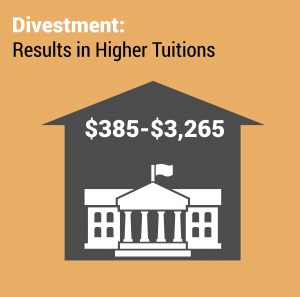 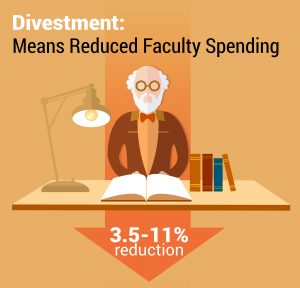 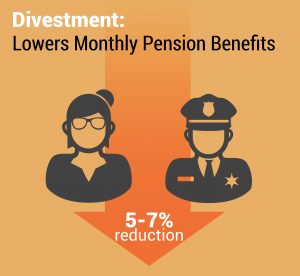 As activists push universities and pension funds to give up their holdings in fossil fuels, many groups have focused on the symbolic reasons to divest without considering the numerous financial impacts of such a decision. Now, a new report by Prof. Hendrik Bessembinder from Arizona State University’s Carey School of Business looks at the hidden costs that accompany divestment, specifically those fixed costs related to executing often-complicated transactions and then actively managing an endowment to ensure it remains compliant with ever-changing definitions of what it means to actually be “fossil-free.” A few of the top findings include:

Transaction and management costs related to divestment – what he refers to as “frictional costs” – have the potential to rob endowment funds of as much as 12 percent of their total value over a 20-year timeframe. This includes the onetime immediate transactions costs an endowment must endure, as well as ongoing annual management fees to stay in line with the changing definition of “fossil free.”

As Prof. Bessembinder highlighted on the launch of the report, “we don’t need a crystal ball to quantify the costs that divested institutions will be forced to bear by merely executing the necessary transactions. These costs have nothing at all to do with the speculative matter of how stocks or industries will do in the future. These are largely unavoidable costs, every institution that divests will incur them, and as my research shows, they significantly add up as time goes on.” 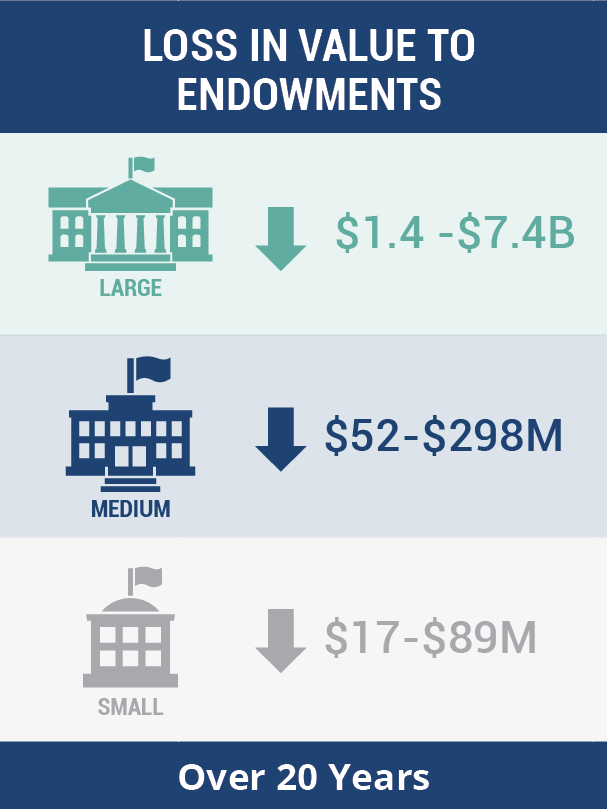 As schools continue to reject calls to divest their endowments of fossil fuels, a new report quantifies for the first time the actual, real-world costs that individual, select schools could expect by divesting. Led by Caltech professor Dr. Bradford Cornell, the report looks into the real-world cost of divestment for five leading U.S. universities with significant endowments — Harvard, Yale, MIT, Columbia, and NY – by drawing on publicly available data to model thousands of different proxy portfolios for each school studied. Dr. Cornell and his team were then able to approximate the composition of each school’s investment fund, and then analyze those portfolios’ performance under both divested and diversified scenarios. A few of the top findings include:

As Dr. Cornell highlighted upon release of the report, “The fact that divestment has the potential to generate lower returns for schools and other institutions isn’t particularly earthshattering news. But the fact that the projected shortfalls associated with divestment are this significant, and this universal – that is the real critical finding here, and one that schools would be smart to evaluate as part of any discussion on divestment moving forward.” 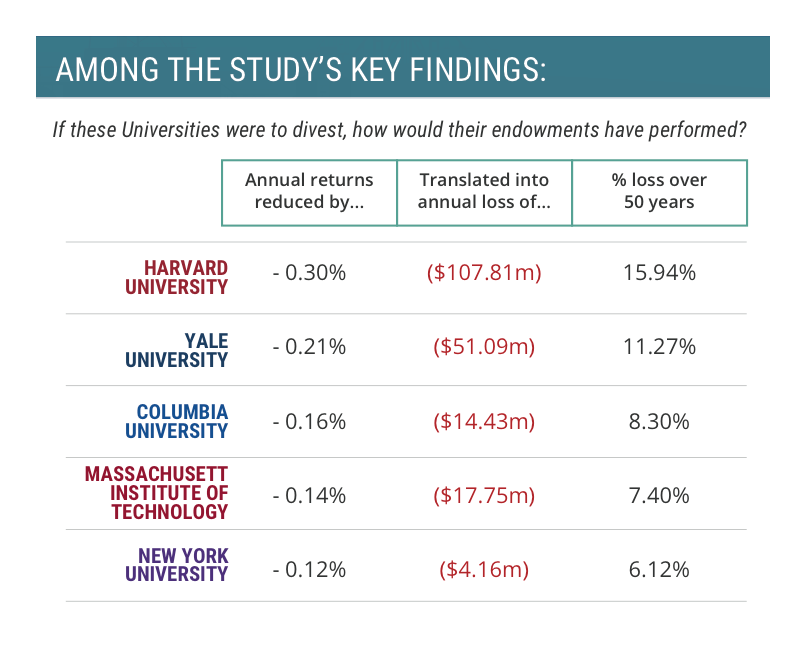 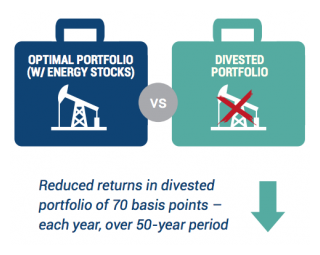 Fossil fuel divestment targets institutions and universities to give up their investments in oil, natural gas, and other energy related companies. Yet this symbolic campaign comes at heavy price.As a recent groundbreaking report by University of Chicago Law School Professor Daniel Fischel found, colleges and universities that choose to divest can collectively expect to see billions of dollars evaporate from their endowment funds each year, all while being forced to pay hundreds of millions in new management fees to comply. A few of the top findings include:

Bottom line: The only entities punished by fossil-fuel divestment are the schools actually doing the divesting. Check out the full reportand fact sheet from Professor Fischel, and visit the What They’re Saying page for more information on why institutions are saying no to this flawed campaign.